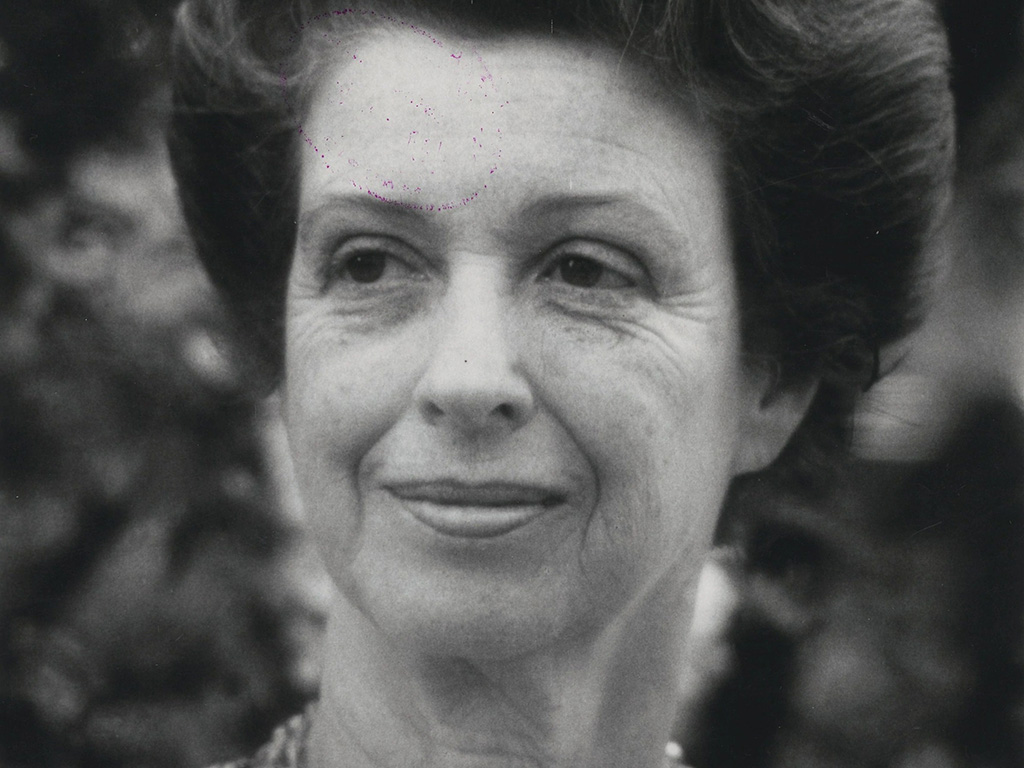 Josephine Jacobsen (19 August 1908 – 9 July 2003) was a Canadian-born American poet, short story writer, essayist, and critic. She was appointed the twenty-first Poet Laureate Consultant in Poetry to the Library of Congress in 1971. In 1997, she received the Poetry Society of America’s highest award, the Robert Frost Medal for Lifetime Achievement in Poetry.

Poet and writer. Josephine Jacobsen published her first poem at the young age of 10. In 1971, the Library of Congress appointed her as Consultant in Poetry to the Library of Congress, predecessor of the U.S. Poet Laureate, a position she held until 1973. Ms. Jacobsen has received honorary degrees from numerous institutions, including the Johns Hopkins University, the College of Notre Dame of Maryland, Towson University and St. Mary's Seminary and University. She is also the recipient of numerous awards, including the Shelley Award, the William Carlos Williams Award, the Robert Frost Medal for distinguished lifetime service to American poetry, and the Lenore Marshall prize. In 1994, she was elected to the American Academy of Arts and Letters. She has been nominated three times for the National Book Award.

Her extraordinary writing career spans an amazing eight decades. Ms. Jacobsen published her first poem in a children's magazine at age 10. Though most widely recognized as a celebrated and much honored poet-with nine published volumes-Ms. Jacobsen also is a successful short story writer and well-regarded literary critic. Her nonfiction writing includes reviews, lectures and essays for such publications as Commonweal, The Nation and The Washington Post. For several years in the late 1970's, she regularly contributed op-ed and travel essays to the Baltimore Sun.

Over the past four years, Ms. Jacobsen has won a writer's version of the Triple Crown. Since 1995, the best of her poetry, fiction and nonfiction has been collected and published in three separate volumes. Maryland's own distinguished publisher, The Johns Hopkins University Press, published her collected poems In the Crevice of Time: New and Collected Poems, in 1995 and in 1996, the University's Press also published her collected short fiction, What Goes Without Saying: Collected Stories. Her collected nonfiction work was published in The Instant of Knowing: Lectures Criticism, and Occasional Prose by the University of Michigan Press in 1997.

One of Ms. Jacobsen's most notable literary accomplishments was serving as Consultant in Poetry to the Library of Congress from 1971 to 1973, the most distinguished post an American poet can hold, recently retitled National Poet Laureter. In 1988, she won the L. Marshal Award for the best book of poetry, The Sisters, published the previous year. In 1993, Ms. Jacobsen received the Shelley Memorial Award from the Poetry Society of America and in 1994 she was elected to the Prestigious American Academy of Arts and Letters, the only poet and only woman elected that year. Additionally, the Poetry Society of America awarded her its highest honor, the Robert Frost Medal for Lifetime Achievement in Poetry, in 1997.

Although women make up a majority of the poets in this country, relatively few have received the recognition accorded to Ms. Jacobsen. Her success as a poet, particularly between the ages of 65 and 85, serves as a model for women's advancement. Ms. Jacobsens' achievements, in the later part of her life offer inspiration for the continued application of one's talents and faculties throughout life and speak to the critical importance of the mature voice in the world of expressive arts.