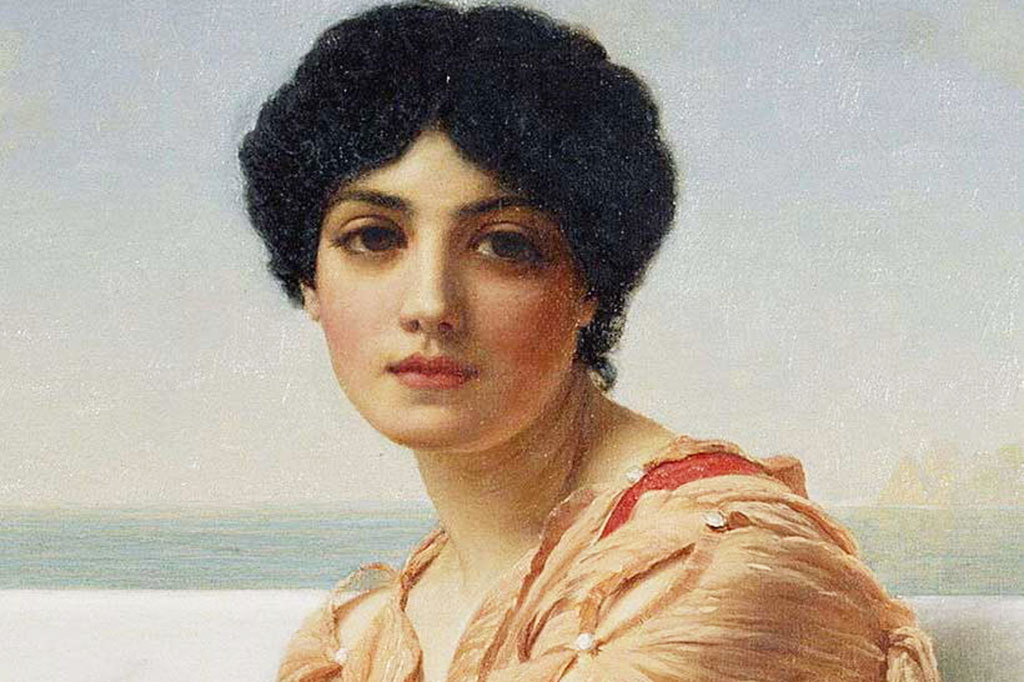 “What cannot be said will be wept.” ― Sappho

Sappho ( Greek Attic: Σαπφώ, Greek Aeolic: Ψάπφω) is an ancient Greek female poet, famous to this day. Sappho can be called the first female poet of the world, who praises the love between women and women. She lived between 630 and 570 BC.

Sappho was a female ancient Greek poet who wrote lyrical poetry famous for its intense passion and description of love. Being bron on the Isle of Lesbos, she is also referred tos as the first Lesbian poet.

Little is known of her actual life, though she was born around 620BC, and died approximately 50 years later.

Unfortunately, much of her poetry has been lost, although some poems have been painstakingly pieced together through surviving fragments.

Details of her life are hard to piece together as there are few rekiable sources. For example, historians are unsure about whether to take her poetry as reliable autobiographycal evidence.

Sappho’s poetry made her famous throughout the ancient Greek world, probably within her lifetime. Soon, like the medieval French poet François Villon, she became a subject of legend and figured later as a character in comedy. Surviving biographical facts are few and are transmitted to us mixed up with the lore of fables and with bits of dramatic fiction.* Sappho was born on Lesbos around 630 b.c., probably in the town of Eresos, but spent most of her life in Mytilene, the most important of the island’s five cities. Her mother’s name was Kleïs; her father’s name may have been Skamandronymos. She was orphaned at the age of six. Her family was socially prominent and politically active.

Lesbos was settled by Aeolic Greeks in the eleventh century b.c. In Sappho’s time, five generations after Homer, it had a flourishing economic, religious, and artistic culture, connections throughout the eastern Mediterranean, and a vibrant local poetic tradition of longstanding and wide fame. The eldest of Sappho’s three brothers, Charáxos, was a merchant captain trading in Egypt; there, to his sister’s displeasure, he became involved with an Egyptian courtesan whom Sappho calls Doríkha (see LP 5 and 15; her real name may have been Rhodópis). Another brother, Lárichos, poured the wine for the Mytileneans at their town hall, a public “office reserved,” C. M. Bowra writes, “for young men of good birth and handsome appearance.” Sappho must have been married young; she had a daughter named Kleïs (LP 98 and 132), and they lived in exile in Sicily during her thirties (LP 98), presumably as a result of her family’s political activities, but later returned to Lesbos, where her tomb was pointed out to tourists in antiquity. She probably died after 570 b.c. She is reputed to have been short, dark, and ugly.

The Text of Sappho's Poems

The poetry of Sappho often revolves around themes of love and passion, and has a calrity and simplicity of languagel within her poetry there is great vividness and directness. The style is often conversatinal - giving an impression of immediacy and action. The poems were also sung to music, meaning they needed to be lyrical in form.

We do not know how Sappho put her poems into circulation. Echoes of her phrases in Pindar, Aeschylus, and others show that her poetry was widely recognized and admired. Ten generations after her death two of the great scholars of Alexandria in the third and second centuries b.c., Aristophanes of Byzantium and Aristarchus of Samothrace, collected and edited her poems in nine books arranged according to meter. The first book (scroll, that is), assembling poems in her eponymous sapphic stanza (e.g., LP 1), contained 1,320 verses; others were probably shorter, but still it is apparent that originally the corpus of her poetry was fairly substantial. By way of comparison this translation, comprising all the surviving fragments of her work that make consecutive sense, however brief, torn, or abruptly interrupted, contains around 500 verses.

For another dozen generations Sappho’s poetry continued to attract the attention and praise of listeners, readers, poets, and scholars, and in the first century b.c. it exercised a seminal influence on the flowering of Latin lyric in the poetry of Catullus and on the Odes of Horace. But by the period of late antiquity (fifth seventh centuries a.d.), when it became imperative for ancient literary texts to be transcribed from scrolls to books in sufficient numbers if they were to have a chance of surviving the ensuing epoch of social upheaval and cultural collapse, the contracting literary interests of the culture and the “obscurity” of Sappho’s Aeolic dialect in a world where Attic Greek had triumphed combined to bring about the eventual loss of her collected poetry. There is evidence suggesting that Byzantine scholars in the tenth and eleventh centuries had access to works of Sappho now lost, but if so, these texts must have perished in the flames when the Fourth Crusade sacked Constantinople in 1204.

From the renaissance of the knowledge of ancient Greek in Europe until the 1890s the only texts of Sappho available to readers were one complete poem, saved because quoted by the critic Dionysius of Halicarnassus (LP 1), the first 17 verses of another preserved in Longinus’s On The Sublime (LP 31), and around 100 brief fragments, usually no more than a word or a phrase, quoted by various ancient grammarians, lexicographers, philosophers, scholars, and rhetoricians whose works’ survival had been sponsored by the interest of medieval schoolmasters.

Since the 1890s, however, our access to Sappho’s poetry has been greatly increased by the discovery of around 100 more fragments on papyrus (one on a potsherd) unearthed by archaeologists mostly in Egypt during the first decades of the twentieth century and gradually deciphered, edited, and published. All of them are mutilated in some degree, many far too seriously to allow them to yield consecutive poetic sense—LP 67, for instance, a scrap of a strip of papyrus torn from the middle of a column of verse to mummify a crocodile:

Not all papyri of Sappho are as pathetically mutilated as this one, and several number among her most important surviving texts (e.g., LP 16, 44, 94, and 96). In 1955 Edgar Lobel and Denys Page assembled and published these new papyrus texts together with the already extant fragments in Poetarum Lesbiorum Fragmenta, the standard modern edition of Sappho’s poetry in the original Aeolic Greek (LP; it also contains the surviving fragments of the poetry of her compatriot and contemporary, Alcaeus).

In recent years advances in photographic imaging techniques and the use of computers to facilitate and speed the reassembly of fragments have begun to assist with the decipherment of papyri. Texts previously illegible can now sometimes be read and the puzzle pieces of the fragments are more easily and rapidly assembled. A fresh surge of progress in papyrology may be beginning. Already in 2004 there appeared a newly discovered complete text of LP 58, known previously only as a brief, badly tattered fragment. It is amazing and delightful, 2,600 years after her birth and at least 800 since it was last read, to witness another complete poem of Sappho emerging into the light of day anew. Happily, there is a plausible prospect of more new recoveries.

Come back to me, Gongyla, here tonight,
You, my rose, with your Lydian lyre.
There hovers forever around you delight:
A beauty desired.

Even your garment plunders my eyes.
I am enchanted: I who once
Complained to the Cyprus-born goddess,
Whom I now beseech

Never to let this lose me grace
But rather bring you back to me:
Amongst all mortal women the one
I most wish to see.