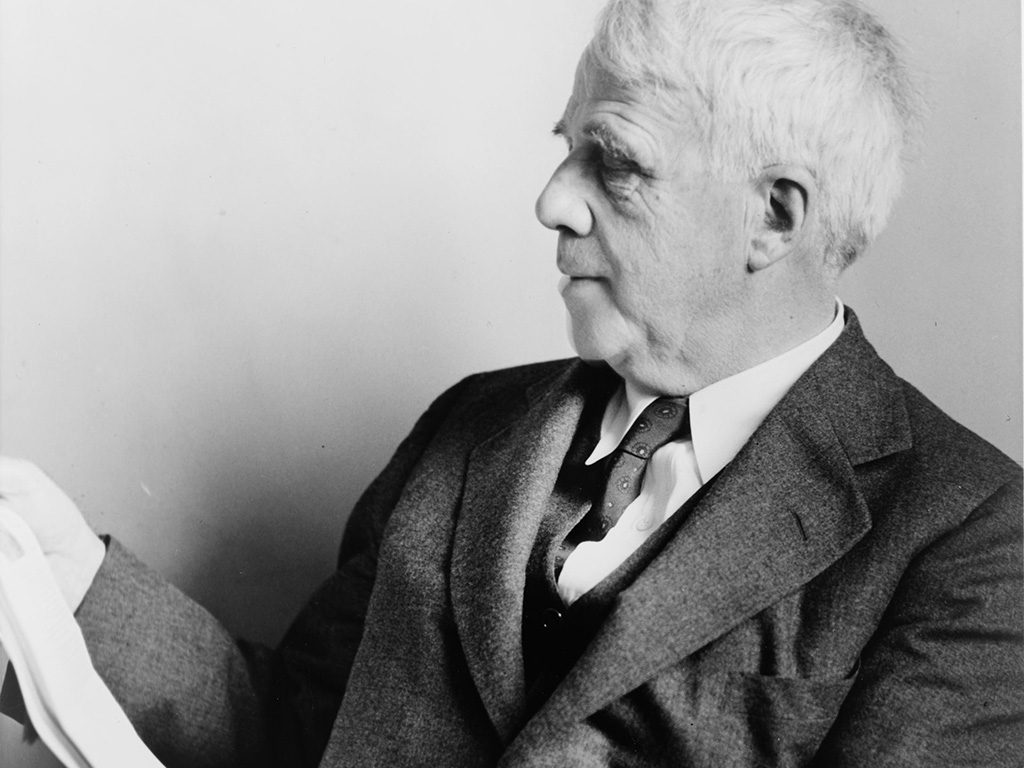 Robert Lee Frost (March 26, 1874 – January 29, 1963) was an American poet. His work was initially published in England before it was published in America. He is highly regarded for his realistic depictions of rural life and his command of American colloquial speech. His work frequently employed settings from rural life in New England in the early twentieth century, using them to examine complex social and philosophical themes. One of the most popular and critically respected American poets of the twentieth century, Frost was honored frequently during his lifetime, receiving four Pulitzer Prizes for Poetry. He became one of America's rare "public literary figures, almost an artistic institution." He was awarded the Congressional Gold Medal in 1960 for his poetical works.

The poet/critic Randall Jarrell often praised Frost's poetry and wrote, "Robert Frost, along with Stevens and Eliot, seems to me the greatest of the American poets of this century. Frost's virtues are extraordinary. No other living poet has written so well about the actions of ordinary men; his wonderful dramatic monologues or dramatic scenes come out of a knowledge of people that few poets have had, and they are written in a verse that uses, sometimes with absolute mastery, the rhythms of actual speech." He also praised "Frost's seriousness and honesty," stating that Frost was particularly skilled at representing a wide range of human experience in his poems.

Jarrell's notable and influential essays on Frost include the essays "Robert Frost's 'Home Burial'" (1962), which consisted of an extended close reading of that particular poem, and "To The Laodiceans" (1952) in which Jarrell defended Frost against critics who had accused Frost of being too "traditional" and out of touch with Modern or Modernist poetry.

In Frost's defense, Jarrell wrote "the regular ways of looking at Frost's poetry are grotesque simplifications, distortions, falsifications--coming to
know his poetry well ought to be enough, in itself, to dispel any of them, and to make plain the necessity of finding some other way of talking about his work." And Jarrell's close readings of poems like "Neither Out Too Far Nor In Too Deep" led readers and critics to perceive more of the complexities in Frost's poetry.

In an introduction to Jarrell's book of essays, Brad Leithauser notes that, "the 'other' Frost that Jarrell discerned behind the genial, homespun New England rustic—the 'dark' Frost who was desperate, frightened, and brave—has become the Frost we've all learned to recognize, and the little-known poems Jarrell singled out as central to the Frost cannon are now to be found in most anthologies."

Jarrell lists a selection of the Frost poems he considers the most masterful, including "The Witch of Coös," "Home Burial," "A Servant to Servants," "Directive," "Neither Out Too Far Nor In Too Deep," "Provide, Provide," "Acquainted with the Night," "After Apple Picking," "Mending Wall," "The Most of It," "An Old Man's Winter Night," "To Earthward," "Stopping by the Woods on a Snowy Evening," "Spring Pools," "The Lovely Shall Be Choosers," "Design," [and] "Desert Places."

I'd like to get away from earth awhile
And then come back to it and begin over.
May no fate willfully misunderstand me
And half grant what I wish and snatch me away
Not to return. Earth's the right place for love:
I don't know where it's likely to go better.
I'd like to go by climbing a birch tree,
And climb black branches up a snow-white trunk
Toward heaven, till the tree could bear no more,
But dipped its top and set me down again.
That would be good both going and coming back.
One could do worse than be a swinger of birches.

In 2003, the critic Charles McGrath noted that critical views on Frost's poetry have changed over the years (as has his public image). In an article called "The Vicissitudes of Literary Reputation," McGrath wrote, "Robert Frost ... at the time of his death in 1963 was generally considered to be a New England folkie ... In 1977, the third volume of Lawrance Thompson's biography suggested that Frost was a much nastier piece of work than anyone had imagined; a few years later, thanks to the reappraisal of critics like William H. Pritchard and Harold Bloom and of younger poets like Joseph Brodsky, he bounced back again, this time as a bleak and unforgiving modernist."

In The Norton Anthology of Modern Poetry, editors Richard Ellmann and Robert O'Clair compared and contrasted Frost's unique style to the work of the poet Edwin Arlington Robinson since they both frequently used New England settings for their poems. However, they state that Frost's poetry was "less [consciously] literary" and that this was possibly due to the influence of English and Irish writers like Thomas Hardy and W.B. Yeats. They note that Frost's poems "show a successful striving for utter colloquialism" and always try to remain down to earth, while at the same time using traditional forms despite the trend of American poetry towards free verse which Frost famously said was "'like playing tennis without a net.'"

In providing an overview of Frost's style, the Poetry Foundation makes the same point, placing Frost's work "at the crossroads of nineteenth-century American poetry [with regard to his use of traditional forms] and modernism [with his use of idiomatic language and ordinary, every day subject matter]." They also note that Frost believed that "the self-imposed restrictions of meter in form" was more helpful than harmful because he could focus on the content of his poems instead of concerning himself with creating "innovative" new verse forms.

In Contemporary Literary Criticism, the editors state that "Frost's best work explores fundamental questions of existence, depicting with chilling starkness the loneliness of the individual in an indifferent universe."[19] The critic T. K. Whipple focused in on this bleakness in Frost's work, stating that "in much of his work, particularly in North of Boston, his harshest book, he emphasizes the dark background of life in rural New England, with its degeneration often sinking into total madness."

In sharp contrast, the founding publisher and editor of Poetry, Harriet Monroe, emphasized the folksy New England persona and characters in Frost's work, writing that "perhaps no other poet in our history has put the best of the Yankee spirit into a book so completely." She notes his frequent use of rural settings and farm life, and she likes that in these poems, Frost is most interested in "showing the human reaction to nature's processes." She also notes that while Frost's narrative, character-based poems are often satirical, Frost always has a "sympathetic humor" towards his subjects.

Includes poems from first three volumes and the poem The Runaway