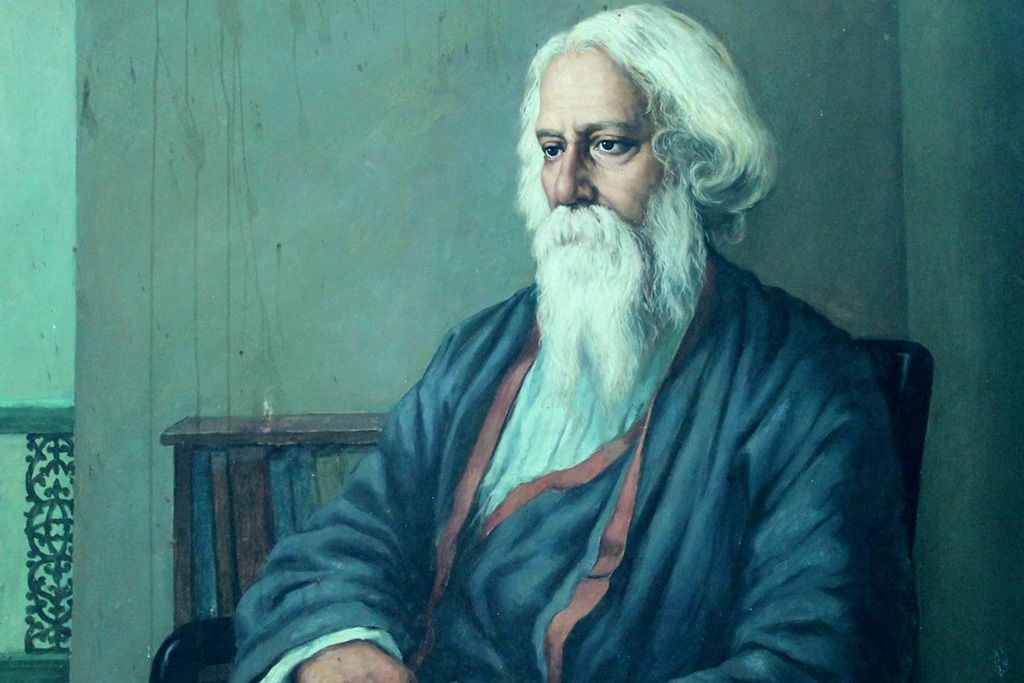 Rabindranath Tagore was born on 7 May 1861 - 1941. At some time towards the end of the seventeenth century, his forefathers had migrated from their native lands to Govindpur, one of the three villages which later came to constitute Calcutta. In the course of time, the family came to acquire property and considerable business interests through the pursuit of commercial and banking activities. They had particularly benefited from the growing power of the British East India Company. Rabindranath’s grandfather, Dwarkanath Tagore, lived lavishly and broke the Hindu religious ban of those times by travelling to Europe, just like his contemporary, Rammohan Roy, the nineteenth century social and religious reformer.

Clouds come floating into my life, no longer to carry rain or usher storm, but to add color to my sunset sky.Rabindranath Tagore, Stray Birds

A Bengali mystic and artist, Rabindranath Tagore was a great poet, philosopher, music composer and a leader of Brahma Samaj, who took the India culture and tradition to the whole world and became a voice of the Indian heritage. Best known for his poems and short stories, Tagore largely contributed to the Bengali literature in the late 19th and early 20th century and created his masterpieces such as Ghare-Baire, Yogayog, Gitanjali, and Gitimalya. The author extended his contribution during the Indian Independence Movement and wrote songs and poems galvanizing the movement, though he never directly participated in it. He was awarded the Nobel Prize in literature in 1913 and became the Asia's first Nobel Laureate. Two famous songs composed by him Amar Shonar Bangala and Jana Gana Mana became a part of the national anthem of Bangladesh and India respectively after their independence. He was the only person to have written the national anthems of two countries. Aside from this, the greatest legacy of the poet to his country remains the world renowned institution he founded known as Visva-Bharati University.

Born on 7 May 1861 in a wealthy and prominent Brahmin family of Bengal (Calcutta), Rabindranath Tagore was the youngest of thirteen children of his father Debendranath Tagore and Sarada Devi. The Tagore family was a leading follower of Brahma Samaj, a new religious sector in the 19th century. Rabindranath Tagore develop an early love for literature, and had begun reading biographies, poems, history, Sanskrit and several others by the age of 12. He also studies the classical poetry of Kalidasa, the father of poetry in India. In 1877, he wrote his first poem, which was composed in a Maithili style. His early works include Bhikharani (The beggar woman) - the first short story in Bengali, Sandhya Sangit which he wrote in 1882 and a poem Nirjharer Swapnabhanga. Nirjharer Swapnabhanga was his first poem which gained him a remarkable success and established him as a poet.

Initially wanting to become a barrister, Tagore took admission at a public school in Brighton, England in 1878. Although he was later sent to study law at University College London, he never finished his degree there and returned home in 1880. In 1883, he married his wife Mrinalini and the couple had five children, among which only three could survive into their adulthood. Rabindranath Tagore took the responsibility of his father’s large states in Shilaidaha in 1890, and began running the family business there. As a part of it, he traveled to many adjacent villages and formed a sympathetic bond with the villagers, who clearly took honor in his company. The duration between 1891 and 1895, which is known as his ‘Sadhna Period’, witnessed some great works of the poet, among which Galpaguchchha was the most popular.

Tagore moved to Santiniketan, West Bengal in 1901 and set up an ashram there which included an experimental school, garden and a library. His wife Mrinalini and his two children succumbed to death during this period. After his father’s death in 1905, he became heir to his large estates which made him financially sound and stable. He also received income from the sale of his family’s jewelry and royalties from his works. By this time, Tagore had written more than thirty poems, drama and fictions, including his major works such as Manasi (1890), Gitanjali (1910), Gitimalya (1914) and many English and Bengali playa. Gitanjli was his most acclaimed work.

In year 1913, he was awarded the Nobel Prize in literature for his exceptional contribution to the Indian and world literature. Further, he received the title Knighthood from the British government in 1915, which he abandoned aftermath of the Jallianwala Bagh massacre in 1919 as a protest against the British rule in India. In 1921, Tagore founded an Institute for Rural Reconstruction- which he later renamed as Shriniketan- and appointed scholars from many places to share their knowledge with the students. As education reformer, he introduced Upanishad ideals of education and widely contributed towards uplifting the ‘untouchables’.

Rabindranath Tagore wrote eight novels and a number of poems and most of his creations are in the Bangla language. His most acclaimed works in novel genre are Ghare Baire, Shesher Kobita, Char Odhay, Gora, Jogajog, and Dak Ghar. Aside from fictions and autobiographical works, he also wrote essays, lectures and short stories on various topics ranging from history to science and arts. As a prolific musician, Tagore influenced the style of such musician such as Amjad Ali Khan and Vilayat Khan. He composed the words and music of the Indian national anthem Jana Gana Mana, which was accepted as the national anthem in 1950.

His song has been accepted as the national anthem of Bangladesh as well, thus making him the first ever person to have written the national anthems of two countries. Tagore discovered his talent as a painter in his early sixties, when his first exhibition was held in Paris. Tagore was credited with the culmination of writing short stories as an art, especially in Bengali. “The fruit seller from Kabul” is considered one of the best creations among at least eighty four stories written by him. Based upon his early experience with villagers, he wrote stories which give a glimpse of the life most Bengali live. Though Tagore wrote vividly in every genre of literature, he was a poet first of all. His poets are an inseparable part of every Bengali family where his poems are recited on all important occasions. His best collection of poems is Gitanjali, which gained him the Nobel Prize in literature in 1913.

Tagore’s political views were somehow at odds with that of Mahatma Gandhi, though the two shared a good rapport and a moderate friendship. However, Tagore denounce the Swadeshi Movement in his acerbic essay The Cult of the Charka in 1925, he continued to support Indian nationalist movement in his own non-sentimental and visionary way. He wrote songs and poems galvanizing the Indian Independence movement. After the Jallianwala Bagh Massacre in 1919, he renounced the knighthood awarded by the British government as a protest against it. His most acclaimed work Jana Gana Mana became the national anthem of India after its declaration as a Republic in 1950.

Tagore’s extensive travel and increasingly hectic work began to take its toll in his later years and he suffered from relentless pain and two long periods of illness. The second phase of illness proved to be fatal as he never recovered from that. He first lost his consciousness in 1937 and had the same experience for the second and last time in late 1940, and died after soon on 7 August 1941. The day is mourned upon across his native Bengal, India and Bengali-speaking world for which he still remains alive in his poems and songs.