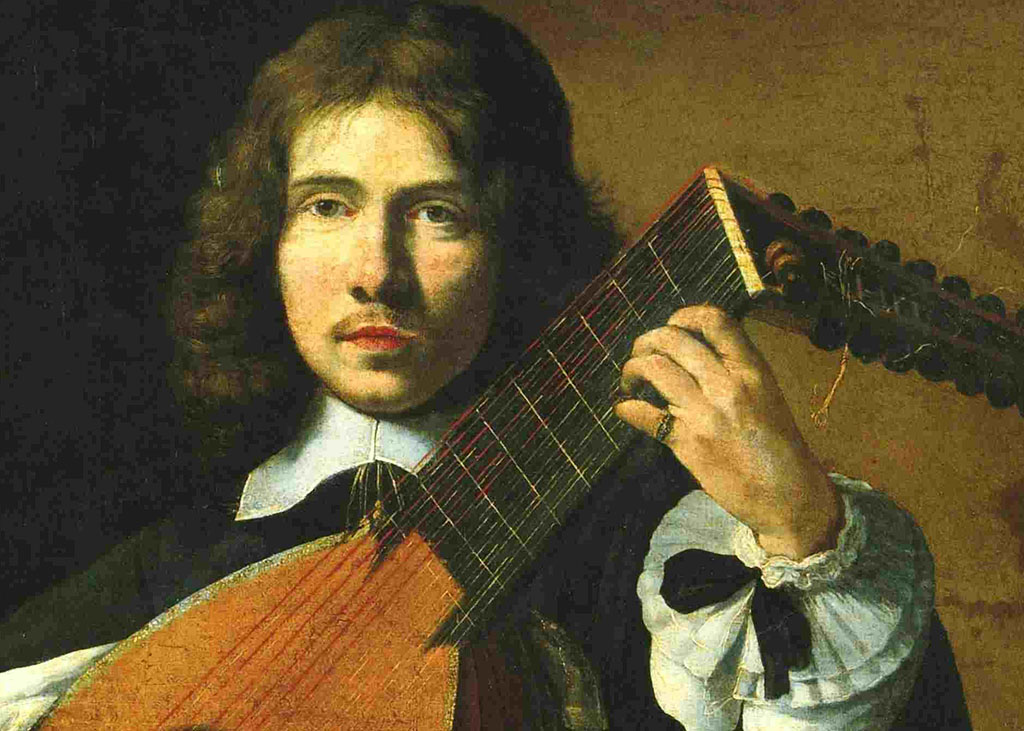 Thomas Campion (1567-1620) was born in London in 1567 “upon Ash Wednesday, and christened at St. Andrews Church in Holbourne.” His father John was a clerk of the Court of Chancery and a vestryman of St. Andrew’s.

He died in 1576 and the sum of £50 was spent on his funeral. The following year Thomas’s mother, Lucy, remarried. In 1580 she, too, died. Orphaned at the age of fourteen, he was sent by his stepfather to Peterhouse as a “gentleman pensioner” and at seventeen he left Cambridge University without taking a degree. A year later he entered Gray’s Inn; it is presumed to follow in his father’s profession. However, there is no evidence of his ever practising law. (His distaste for the profession is evident in his Latin epigrams.) At Gray’s Inn he made many artistic friends and performed in plays and masques.

By 1597 Campion had associated with the chief players in the development of the English lute song. He contributed a dedicatory poem to John Dowland’s First Book of Songs or Ayres. This was Dowland’s first collection and also the first English publication in a new genre. Along with Dowland (ca. 1563-1626), Campion was one of the most prolific composers of English lute songs, or Ayres. Unlike most composers of songs, he wrote all of the poems he set to music himself. In 1601 he was significantly involved in the publication of Philip Rosseter’s Book of Ayres. By 1604 Rosseter was the king’s lutenist and remained active in court entertainment throughout most of King James’s reign. He was Campion’s best friend. Their book was presented for publication by Rosseter, and it was he who wrote the dedication to Campion’s friend and supporter Sir Thomas Monson, but Campion contributed the first twenty-one songs and is almost certainly the author of the brief but groundbreaking treatise on song presented as an address “To the Reader.”

Further biographical details are scant. On 10 February 1605, Thomas Campion received his medical degree from the University of Caen. While in France, he may have participated in the siege of Rouen with Lord Essex in 1591. He returned to London where he began practicing as a doctor at the age of forty. The most dramatic event of his life was his involvement in the death in the Tower of London of Sir Thomas Overbury. Campion confessed to having received the sum of £1,400 as an intermediary for his patron, Sir Thomas Monson. However, it was accepted that he was unaware “for what consideration it was paid” and he was exonerated.

Campion is thought to have lived in London until his death, at the age of fifty-three, on March 1st, 1620. He is reputed to have been treating the sick during the outbreak of the plague. He was apparently unmarried and had no children. He was buried the same day at St Dunstan-in-the-West in Fleet Street. His will, made on the day of his death, bequeathed “all that he had” to his friend, the lutenist, Philip Rosseter, with whom he had produced his first Booke Of Ayres in 1601. He “wished that his estate had bin farr more.” It amounted to £22.

Thomas Campion On Prosody And Rhyme

There are constant battles among poets and critics over what is proper and poetic in matters of prosody. An intriguing recent book by James Matthew Wilson, The Fortunes of Poetry in an Age of Unmaking, looks at such matters in contemporary American poetry. In Campion’s time the question of prosody and rhyme became pertinent. Various Elizabethan writers had addressed the problem – Ascham, Gascoigne, Harvey, Spenser, Sidney and, in 1602, Thomas Campion in his Observations in the Art of English Poesie “wherein it is demonstratively prooved, and by example confirmed, that the English toong will receive eight severall kind of numbers, proper to it selfe, which are all in this booke set forth, and were never before this time by any man attempted.” While others had shown that English poetry could stand on its own feet (pardon the pun) Campion sought to revive “classical numbers” or a quantitative versification where the syllables are arranged according to their length and duration rather than according to accent or stress, as was common in the poetry of his contemporaries. The practice of writing in Latin, as well as his musical interests, had, no doubt, coloured his views of how to arrange his words metrically.

His views on rhyme were also controversial at the time, although John Milton, at a later time, would endorse them in his own fashion, and they would meet with much greater agreement today. Campion believed rhyme to be a rhetorical figure which ought “sparingly to be used, lest it should offend the ear with tedious affectation.” He argued that the search for rhyming words “enforceth a man oftentimes to abjure his matter and extend a short conceit beyond all bounds of art.” These views, allied to his attempts to blend English poetry with classical metrics, led Samuel Daniel, in 1603, to compose his reply, A Defence of Rhyme.

The Latin Epigrams Of Thomas Campion

In common wth many poets of his age, (see my post on the brief poems of John Owen) Campion wrote Latin epigrams. These enjoyed an enormous vogue in Elizabethan times. He wrote almost 500 of the brief poems. His 1595 collection, Poemata, contained 129 epigrams. A second edition of his poetry in 1619 consisted of two books of epigrams: the first book consisted of 225 new epigrams; the second book consisted of 228 epigrams of which almost a hundred were reprinted, some with revision, from the earlier book. (The 1595 edition was printed by Richard Field of Stratford-on-Avon, who also printed Shakespeare’s Lucrece and Venus and Adonis, the 1619 one by E. Griffin.)

Campion defined the epigram in the preface to his A Book of Ayres (1601): What Epigrams are in Poetrie, the same are Ayres in musicke, then in their chiefe perfection when they are short and well seasoned. The seasoning he mentions in one epigram (see Epigram 1.34 below) is pepper. The influence of Catullus and Martial is acknowledged. Their subject matter includes lusus…mollis…iocos…levis (pleasant mockery, lighthearted joking). Campion’s approach is light-hearted as he explains, I haur written diuers light Poemes in this kinde which, for the better satisfaction of the reader I thought conuenient here in way of example to publish. They were popular in his day. In 1598 Francis Meres placed him among those who have attained good report and honourable advancement in the Latin empyre. His friend, Charles Fitzgeffrey, considered him second only to Sir Thomas More as an English writer of Latin epigrams. However, in 1595, William Covell, while praising the epigrams, disliked their extreme licentiousness.

Translating The Epigrams Of Thomas Campion

I have not been able to discover many translations of the epigrams so I took the liberty of translating them myself. I took other liberties too. These translations differ in three major respects from the originals.

Metrics: While Campion used classical metrics in his Latin poems, I have confined myself to the classic English couplet using iambic pentameters.

Rhyme: While Campion disdained rhyme, as mentioned above, I have used it throughout these translations.