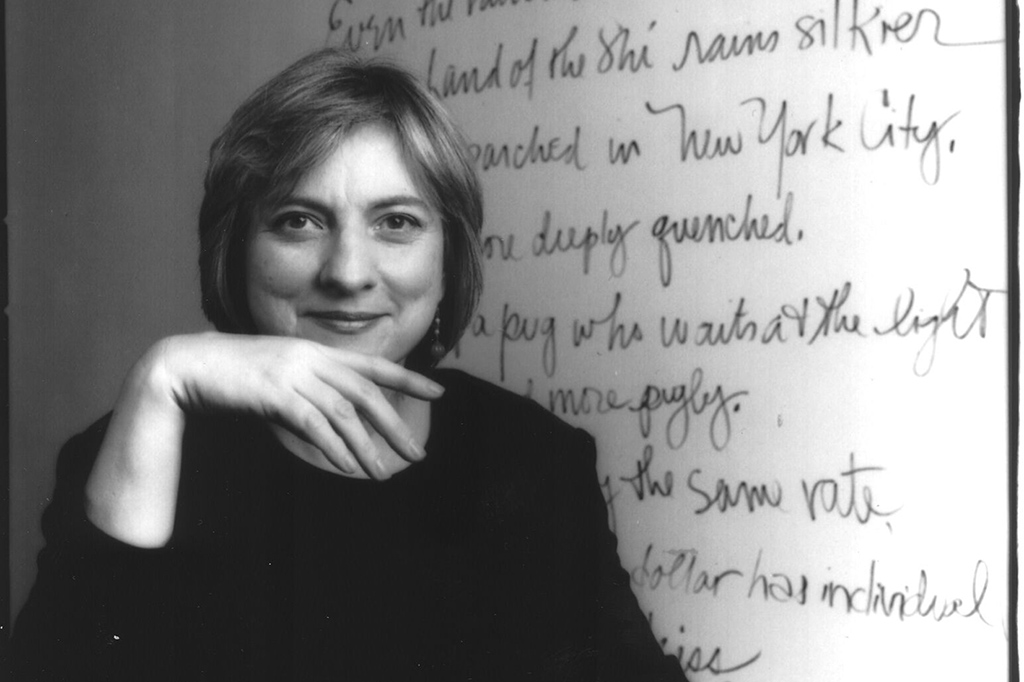 [Peacock] has a luxuriantly sensual imagination—and an equally sensual feel for the language. In mood her poems range from high-spirited whimsy to bemused reflection. Whatever the subject, rich music follows the tap of Molly Peacock’s baton.Washington Post
Peacock’s poems are filled with little formal miracles, the sort of verbal dazzlement we grew up on but have starved for in the barren days of the plain style.Georgia Review

Molly Peacock is a poet and biographer whose multi-genre literary life takes her from poetry to prose, from words to words-and-pictures, and from lyric self-examination to curiosity about the lives of others.

She is the author of seven volumes of poetry, including The Analyst, poems about a decades-long patient-therapist relationship that reverses and continues to evolve after the analyst’s stroke and recovery through painting, The Second Blush, poems about a mid-life marriage, and Cornucopia: New & Selected Poems. Widely anthologized, her poems appear in The Best of the Best American Poetry and The Oxford Book of American Poetry. She is former president of the Poetry Society of America, and was a co-creator of the Poetry in Motion program on New York City’s public transportation. She co-edited the anthology Poetry in Motion: 100 Poems from the Subways and Buses. In Canada she created The Best Canadian Poetry in English series, now in its ninth year.

Her other prose books include How to Read a Poem…and Start a Poetry Circle. She is the editor of a collection of essays, The Private I: Privacy in a Public World. Peacock’s essays have appeared in Elle, House & Garden, Creative Nonfiction, New York Magazine, and O the Oprah Magazine.

Molly Peacock also wrote and performed in a one-woman show in poems, The Shimmering Verge, which presents her life as a poet. The show toured the US and Canada, including off Broadway. The New York Times described it as “stunning memory pieces…[with] animated, sometimes comical delivery.”

Molly Peacock is the author of seven books of poetry, including The Analyst, The Second Blush and Cornucopia: New & Selected Poems. She is also the author of several books of prose and a memoir, Paradise, Piece by Piece. Her poems have appeared in The New Yorker, The Nation, The New Republic, The Paris Review, and other leading literary journals. Among her honors are fellowships from the Danforth, Ingram Merrill, and Woodrow Wilson Foundations, as well as the National Endowment for the Arts. In Canada she is the series editor for The Best Canadian Poetry in English, and the Poetry Editor of the Literary Review of Canada.

When her psychoanalyst became a painter after surviving a stroke, the distinguished and beloved poet Molly Peacock, her longtime patient, took up a unique task. The Analyst is a new, visceral, twenty-first-century In Memoriamin which Peacock brilliantly tells the story of a decades-long patient-therapist relationship that now reverses and continues to evolve. Peacock invigorates the notion of poetry as word-painting: a tapestry of images, from a red enameled steamer on a black stove to Tibetan monks funneling glowing sand into a mandala, create the backdrop to this quest to define identity.

Take the sumptuousness of Molly Peacock’s own #1 bestselling The Paper Garden, the extraordinary creative variety of The Bedside Book of Birds, and the cat-nip-for-language-geeks appeal of Eats, Shoots and Leaves, and wrap it around tales rich with wisdom and humanity, and you get Alphabetique: the most gorgeous gift book of the season. Molly Peacock has written a new classic, a book of magical tales inspired by the lives of the letters of the alphabet. Alphabetique, or Tales from the Lives of the Letters is one-of-a-kind, but nevertheless fits perfectly with Molly Peacock’s extraordinary body of work, drawing on the same wellsprings of creativity and artistry as her poetry and her nonfiction, especially The Paper Garden. These 26 charming, incisive, sensual stories of love, yearning, and self-discovery are complimented by Kara Kosaka’s layered, jewel-bright collages.

A rumination on art and the blossoming beauty of self that can be the gift of age and love.Kirkus Reviews

A beautifully written tour de force from an internationally acclaimed poet, The Paper Garden is at once a biography of an extraordinary eighteenth-century woman and a fascinating meditation on late-life creativity. Mary Granville Pendarves Delany (1700-1788) was the witty, beautiful, and talented daughter of a minor branch of a powerful family. Married off at sixteen to a sixty-one-year-old drunken squire to improve the family fortunes, then widowed by twenty-five, she would spurn many suitors over the next twenty years, including the charismatic Lord Baltimore. She cultivated a wide circle of friends, including Handel and Jonathan Swift. And she painted, she stitched, she observed, as she swirled in the outskirts of the Georgian court. In mid-life, she finally found love, and married again. Upon her second husband’s death twenty-three years later, she arose from her grief; picked up a pair of scissors; and, at the age of seventy-two, created a new art form, mixed-media collage. Over the next decade, Mrs. Delany created an astonishing 985 botanically correct, breathtaking cut-paper flowers, now housed in the British Museum and referred to as the Flora Delanica. Delicately, Molly Peacock has woven parallels in her own life around the story of Mrs. Delany’s and, in doing so, has made this biography into a profound and beautiful examination of the nature of creativity and art. Gorgeously designed and featuring thirty-five full-colour illustrations, this is a sumptuous and lively book full of fashion and friendships, gossip and politics, letters and love. It’s to be devoured as voraciously as one of the court dinners it describes.

Poems that rhyme, what joy. Homey poems about an unexpected late marriage to the calm man a shy boy from the past became, what bliss. Sweet poems of bed, cats, and kitchen time that abruptly crack open to reveal the chasm of fear and loss: powerful stuff. Peacock is in peak form in these seductive poems that swing and twirl so prettily, then suddenly, deviously, shockingly carom from contentment to despair and back again, just like life. And how spangled and vivid each domestic scene is, how electric with feelings and shadowed by death, like paintings by Bonnard or Vuillard. Because cancer made the marriage seem “a doomed possibility,” because the poet is confronting the haunting absence of a beloved cat, a smashed cup, a scar, dreams of epic cold and a dead sister. But then there is also a “jeweled” drop of water. A surprising kiss. A yoga pose and its “lunging beauty.” Peacock is valiant, trenchant, funny, and on point. —Donna Seaman

“There’s a delicious tang to Peacock’s vital poems—a taste of earth, salty and laced with iron, a headiness like that carried by the breeze just before a spring rain. This electric juiciness is just as pungent in poems from 27 years ago as it is in the suite of new poems. The older poems in this volume have appeared in four previous collections of her work, including Raw Heaven (1984) and Original Love (1995). Wielding bright metaphors and adeptly combining story and lyricism, Peacock makes the annealing of the self in the furnace of family and the fever of erotic love her signature theme. Her insouciant wit deflects a brooding soul in surprising and gratifyingly lucid poems that mesh a rich physicality with arresting emotional precision. In her newest work, Peacock interprets her vision of “The Land of Shi,” a fugitive Celtic realm that manifests itself whenever “the air suddenly intensifies, and you are in another world,” an elegant description of the magic of poetry and a place Peacock carries readers to in style.” —Donna Seaman, Booklist

The author of four volumes of poetry, Molly Peacock proves she is equally adept at prose in this vividly graceful memoir. Some would say that Paradise, Piece by Piece is one more story of growing up in a dysfunctional family (alcoholic father, depressed mother, rebellious younger sister). Others would focus on Peacock’s turbulent romantic life, while others still would place the emphasis on her decision to remain childless. The truth of the matter is that all of these threads are vital components of a single, intricately woven tapestry, held together by Peacock’s painstaking attention to detail. Anybody who has struggled to define his or her own life against the expectations and demands of others (be they society or one’s own blood) will find inspiration in Molly Peacock’s life. —Amazon.com

Imagine starting your life’s work at seventy-two. At just that age, Mary Granville Pendarves Delany (May 14, 1700-April 15, 1788), a fan of George Frideric Handel, a sometime dinner partner of satirist Jonathan Swift, a wearer of green-hooped satin gowns, and a fiercely devoted subject of blond king George III, invented a precursor of what we know as collage. One afternoon in 1772, she noticed how a piece of colored paper matched the dropped petal of a geranium. After making that vital imaginative connection between paper and petal, she lifted the eighteenth-century equivalent of an X-Acto blade (she’d have called it a scalpel) or a pair of filigree-handled scissors—the kind that must have had a nose so sharp and delicate that you could imagine it picking up a scent. With the instrument alive in her still rather smooth-skinned hand, she began to maneuver; carefully cutting the exact geranium petal shape from the scarlet paper.

Then she snipped out another.

And another, and another; and with the trance-like efficiency of repetition—commencing the most remarkable work of her life.

—from The Paper Garden: An Artist Begins Her Life’s Work at 72