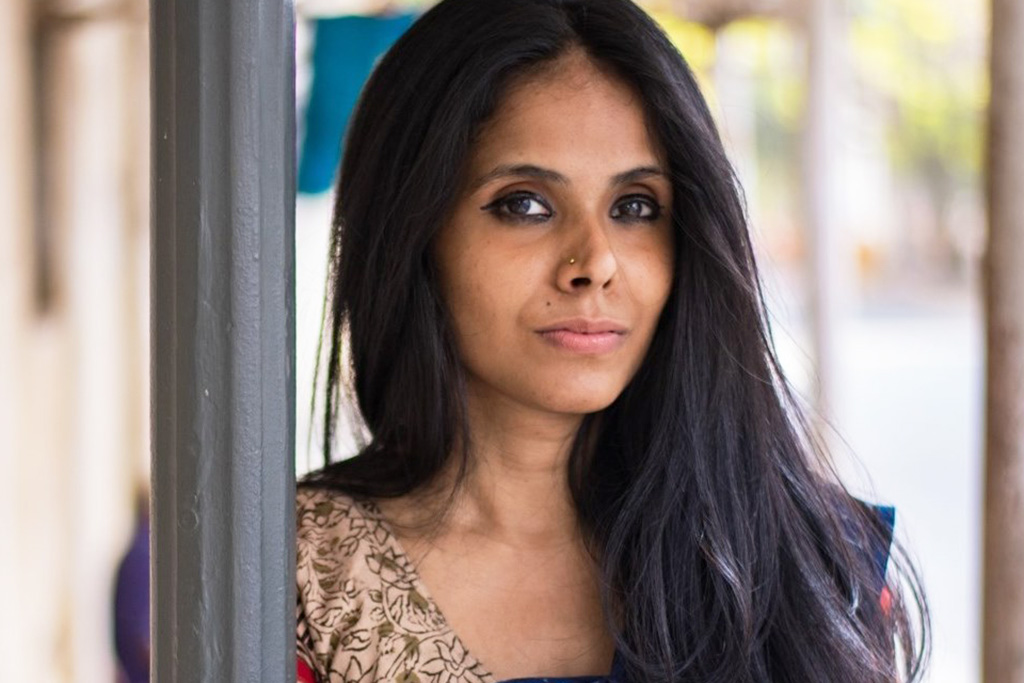 Ilavenil Meena Kandasamy (born 1984) is an anti-caste activist, poet, novelist and translator. Her writing aims to deconstruct trauma and violence, while spotlighting the militant resistance against caste, gender, and ethnic oppressions. Meena published two collections of poetry, Touch (2006) and Ms. Militancy (2010). From 2001-2002, she edited The Dalit, a bi-monthly alternative English magazine of the Dalit Media Network.

Her latest work is a collection of essays, The Orders Were to Rape You: Tamil Tigresses in the Eelam Struggle (2021). Her novels have been shortlisted for the Women’s Prize for Fiction, the International Dylan Thomas Prize, the Jhalak Prize and the Hindu Lit Prize.

Activism is at the heart of her literary work; she has translated several political texts from Tamil to English, and previously held an editorial role at The Dalit, an alternative magazine. She holds a PhD in sociolinguistics. Her op-eds and essays have appeared in The White Review, Guernica, The Guardian and The New York Times, among other places.

Born in 1984 to Tamil parents, both university professors, she developed an early interest in poetry, and later adopted the name Meena. She completed a Doctorate of Philosophy in Socio-linguistics from Anna University, Chennai. She began writing poetry at age 17 and began translating books by Dalit writers and leaders into English.

In her late teens (2002) she was the editor of The Dalit, a bimonthly “that provided a platform to record atrocities, condemn oppressive hierarchies and document the forgotten heritage.” Subsequently, she translated the essays and speeches of Viduthalai Chiruthaigal Katchi founder-leader Thol.Thirumavalavan into English: Talisman: Extreme Emotions of Dalit Liberation (2003) and Uproot Hindutva: The Fiery Voice of the Liberation Panthers (2004). In 2007, she translated Dravidian ideologue Periyar's feminist tract Penn Yaen Adimai Aanaal? (Why Were Women Enslaved?) and co-wrote the first English biography of Kerala's iconic Dalit leader Ayyankali.

Her debut collection of poems, Touch (2006) was themed around caste and untouchability, and her second collection, Ms Militancy (2010) was an explosive, feminist retelling/reclaiming of Tamil and Hindu myths.

Her critically acclaimed first (anti)novel, The Gypsy Goddess, (2014) smudged the line between powerful fiction and fearsome critique in narrating the 1968 massacre of forty-four landless untouchable men, women and children striking for higher wages in the village of Kilvenmani, Tanjore, Tamil Nadu. Her second novel, a work of auto-fiction, When I Hit You: Or, The Portrait of the Writer As A Young Wife (2017) drew upon her own experience within an abusive marriage, to lift the veil on the silence that surrounds domestic violence and marital rape in modern India. It was selected as book of the year by The Guardian, The Observer, Daily Telegraph and Financial Times; and was shortlisted for the Women's Prize for Fiction 2018, among others. Her third novel, Exquisite Cadavers, a work of experimental fiction was published in November 2019, and like her other novels was longlisted for the Swansea University International Dylan Thomas Prize.

She received a PEN Translates award for her translation of Salma's Manamiyangal (Women, Dreaming; Titled Axis Press, Penguin-Randomhouse India, 2020). In 2019-2020, she was able to expand and explore her non-fiction writing through an Arts Council, Developing Your Creative Practice (DYCP) grant. This support enabled her to write two long-form essays exploring female militancy in the LTTE/ Eelam Tamil liberation struggle (The Orders Were to Rape You (The White Review) and The Poetry of Female Fighters (Guernica)). This culminated in her latest book.

She holds a PhD in sociolinguistics from Anna University, Chennai (2010). Her work has appeared in eighteen languages. She lives in southern India with her children and her partner. She is represented by David Godwin Literary Associates.

“Ms Militancy”, the title poem of this volume, is based on Kannaki, the heroine of the Tamil Classic Silapathikaram. This poem is a call to women to be revolutionary and courageous like the heroine herself.