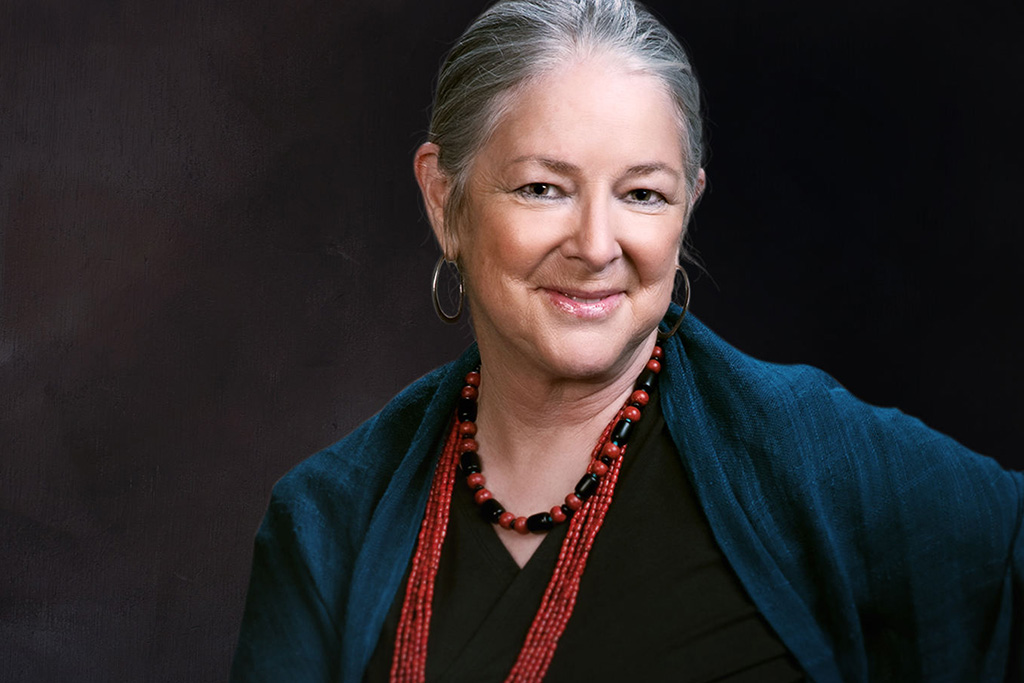 Poet and novelist Linda Hogan has grounded way of writing and, consequently, the reader feels what nature has to teach the native people and on the renewable female forces that shape the world. Being a Chickasaw heritage, Hogan draws from the matrilineal and matrilocal oral history of her ancient people.

She attempts to restore the balance between female and male power which has been altered by the effects of early Christian Americans. Hogan reveals ancient wisdom native people have about nature but she does this in a mythological manner.

Although born in Colorado, Hogan has her Chickasaw roots in south central Oklahoma; she is descended from a family of storytellers, who influence her writing. Poet, novelist, and essayist, she writes and tells her story from a Native American perspective. Hogan began to write in her late twenties while working with orthopedically handicapped children.

Reading Kenneth Rexroth's work during her lunch hours gave her onfidence to start writing. For her the process of writing tapped into her own life; she told an interviewer, "I write because the poems speak what I can't say in my normal language."

Hogan received an M.A. from the University of Colorado at Boulder (1978), where she is currently a member of the faculty. Previously she taught American Studies/American Indian Studies at the University of Minnesota in Minneapolis (1982-84) and at Colorado College (1980-84). She was awarded both the Pushcart Prize and a National Endowment for the Arts grant in 1986.

Hogan's first book of poetry, Calling Myself Home (1978), is about discovering herself. In her introduction she wrote, "These first poems were part of that return for me, an identification with my tribe and the Oklahoma earth, a deep knowing and telling how I was formed of these two powers, called ancestors and clay.

Home is in the blood, and I am still on the journey of calling myself home." In "Heritage" she deals with the "painful and also inescapable reality and knowledge of being mixed." A later volume of poems, Seeing Through the Sun (1985), received an American Book award for poetry from the Before Columbus Foundation in 1986.

In That Horse (1985), a collection of notable short stories, Hogan incorporates both her own and her father's story about the same horse, pointing out that they are very different stories. Her goal is to show the history of the time: " That Horse deals with the historical fact of fiction and what's happened with Chickasaw people and what's happened in my own family particularly." Red Clay: Poems and Stories (1991) brings together work previously published in Calling Myself Home and That Horse.

Mean Spirit (1990), Hogan's first novel, received the Oklahoma Book award for fiction (1990) and the Mountains and Plains Booksellers Association Fiction award. In this long, sad, historical novel, set in the early 1920s, Hogan chronicles the experience of two Osage Indian families during a time when "oil barons and government agents in Oklahoma swindle oil-rich, landowning Indians out of their land and rights."

Her writing style is spare and compact but rich in detailed descriptions of Native American rituals and customs. To write this novel, Hogan drew again from the history of her family. Like many Chickasaw and Choctaw people in the 1930s, her family lost everything when the government and the banks foreclosed on their land. When Hogan was growing up, she was very conscious of the land her family had lost and points out that the Ardmore Airport in Oklahoma was "my family's ranch land."

Hogan re-creates Native American history and stories in her fiction; starting from this spiritual foundation, her poems seek images to embody its understanding of life and nature. Just as horses, turtles, birds, and small insects are prominent carriers of her poetic images, so too are "pollen blowing off the corn" or "yellow flowers" or the "yellow sun," as well as "red clay," and "brown earth." Her poetry, with its distinctive drive and rhythm and life, is constantly manifesting its respect for the natural world.

Hogan volunteers at wildlife rescue clinics to rehabilitate and to care for eagles, owls, and other birds of prey. She considers caretaking the basic work of living on earth and a relation between how we care for the animalpeople and the plants and insects and land and water, and how we care for each other, and for ourselves."

A recipient of the Lannan award in 1994, her Book of Medicines (1993) was a National Book Critics Circle finalist. This volume of poetry is divided into two long sections, "Hunger" and "Book of Medicines." The poems lay out a plan, much as the New Testament gospels do, in which a new vision of the world takes shape. In Hogan's poem, however, God resides not above, but within nature. A woman-centered environmentalist view emerges in Hogan's poetry.

Two books appeared late in 1995. Dwellings: A Spiritual History of the Living World gathers 17 essays that express Hogan's belief in the interconnectedness of all life forms.

In the preface she says that she writes "out of respect for the natural world, recognizing that humankind is not separate from nature." In the novel Solar Storms, she writes about five generations of Native American women and the struggles they go through to preserve their way of life. Solar Storms won the Colorado Book award for fiction. It is at once a Native American comingof-age story and an emotional portrayal of the ties that connect native peoples to their land and origins.

Hogan is one of three editors for a multihued collection of writings by women on their kinship with animals. Through poems, reports from the field, ruminations, interviews, short stories, and formal essays, a variety of women nature writers and scientists examine the dialogue between species.

Intimate Nature: The Bond Between Women and Animals (1999) gives readers the opportunity to glimpse the personal yet profoundly universal impact of animals on women's lives.

Many reviewers highlight Hogan's eye for detail and the Native American rituals and customs depicted in her poems and novels. She approaches her characters with reverence and brings them to life with quick, spare phrases.

Hogan says, "My writing comes from and goes back to the community, both the human and the global community. I am interested in the deepest questions, those of spirit, of shelter, of growth and movement toward peace and liberation, inner and outer."