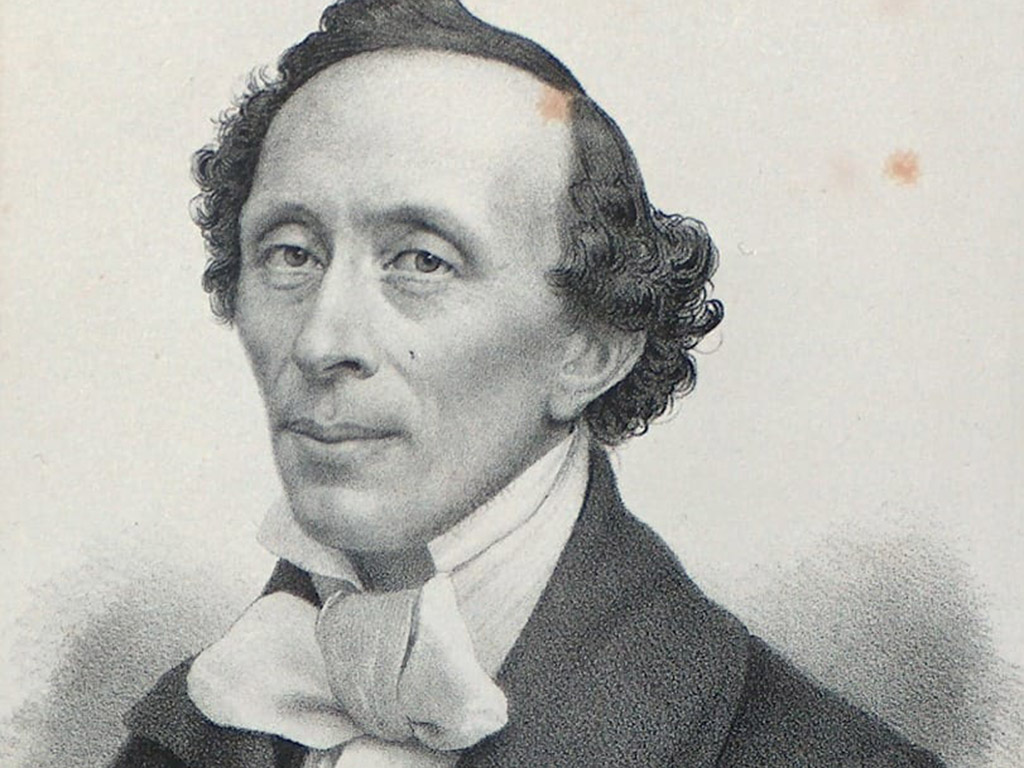 Hans Christian Andersen, (born April 2, 1805, Odense, near Copenhagen, Denmark—died August 4, 1875, Copenhagen), was a Danish author. Although a prolific writer of plays, travelogues, novels, and poems, he is best remembered for his fairy tales.

At age 14 Hans moved to the capital city Copenhagen in an attempt to pursue a career in the theatre. Initial success as a singer came to a halt when his voice broke, but associates complemented him on his poetry and he also began to write plays.

One of the theatre directors arranged for some formal education to be paid for and Hans attended Copenhagen University. Hans was also able to travel widely around Europe, meeting various famous writers including Victor Hugo, Alexandre Dumas and Charles Dickens. Andersen continued to travel extensively throughout his adult life and often drew inspiration from his travels to aid his writing.

Andersen’s best known works are his 'Fairy Tales and Stories', written between 1835 and 1872. His earliest stories were based on traditional folk tales - much like the tales of the Brothers Grimm, published twenty years earlier, had been. However, the bulk of his tales are original, with the most famous having passed into common parlance as metaphorical phrases (for example, 'The Ugly Duckling' and 'The Emperor’s New Clothes').

In 1835 Andersen completed his first novel, The Improvisatore, and he published his first small volume of fairy tales, an event that attracted little attention at the time. The Improvisatore, like most of Andersen's novels, was based on his own life. It was a success not only in Denmark but also in England and Germany. He wrote five more novels, but as a writer of drama, Andersen failed almost completely. Many of his poems are still a part of popular Danish literature, however, and his most lasting contributions, after the fairy tales, are his travel books and his autobiography (the story of his own life).

A lifelong bachelor, Andersen was frequently in love (with, among others, the singer Jenny Lind). He lived most of his life as a guest at the country homes of wealthy Danish people. He made many journeys abroad, where he met and in many cases became friends with well-known Europeans, among them the English novelist Charles Dickens (1812–1870).

Andersen began his fairy-tale writing by retelling folk tales he had heard as a child from his grandmother and others. Soon, however, he began to create his own stories. Most of his tales are original. The first volumes written from 1835 to 1837 contained nineteen stories and were called Fairy Tales Told for Children. In 1845 the title changed to New Fairy Tales. The four volumes appearing with this title contained twenty-two original tales and are considered Andersen's finest works. In 1852 the title was changed to Stories, and from then on the volumes were called New Fairy Tales and Stories. During the next years Andersen published a number of volumes of fairy tales. His last works of this type appeared in 1872. Among his most popular tales are "The Ugly Duckling," "The Princess and the Pea," and "The Little Mermaid."

At first Andersen was not very proud of his fairy-tale writing, and, after talks with friends and Danish critics, he considered giving them up. But he later came to believe that the fairy tale would be the "universal poetry" (poetry that exists in all cultures) of which so many romantic writers dreamed. He saw fairy tales as the poetic form of the future, combining folk art and literature and describing both the tragic and the comical elements of life. Andersen's tales form a rich, made-up world. While children can enjoy most of the tales, the best of them are written for adults as well. The tales also take on different meanings to different readers, a feat only a great poet can accomplish. Andersen died in Copenhagen, Denmark, on August 4, 1875.

The familiar themes of many traditional stories are prevalent in fairy tales: