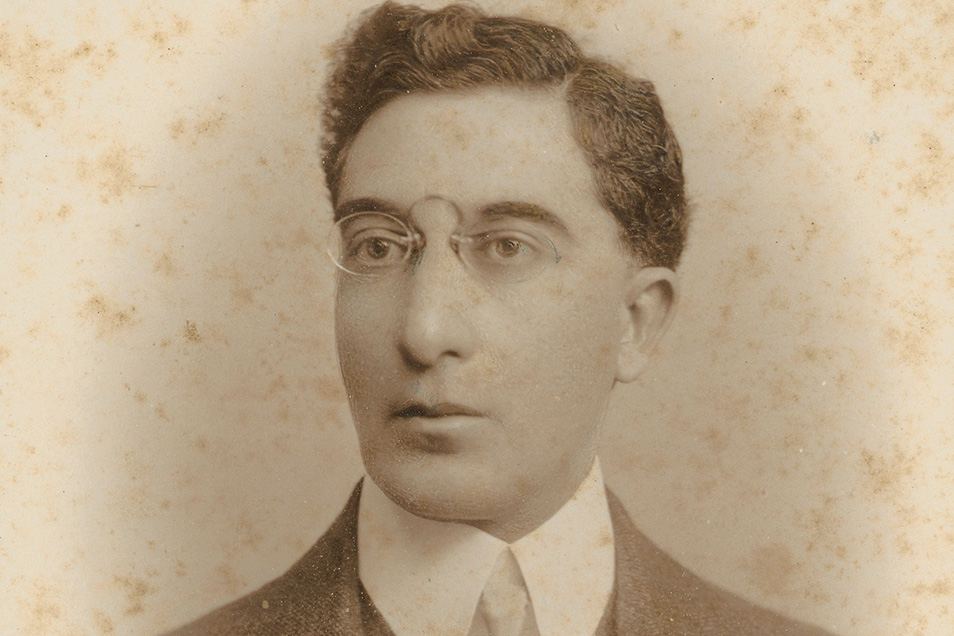 ‘I am from Constantinople by descent, but I was born in Alexandria— at a house on Seriph Street; I left at a young age and spent many of years of my childhood in England. I visited that country later on as an adult although for a short period of time. I also lived in France. During my adolescence I lived in Constantinople for about two years. I haven’t visited Greece for long time. My last employment was as a clerk at a Government office under the Ministry of Public works of Egypt. I speak English, French, and some Italian.’

This auto-biographical note of Constantine P. Cavafy or Konstantinos Petrou Kavafis, (Κωνσταντίνος Πέτρου Καβάφης), published in 1924 in the celebratory issue of the magazine New Art, may be supplemented with the following.

Cavafy was born on April 17/29th of 1863. Son of a family of merchants, he had eight older siblings all of whom died before him. Two of his brothers were painters, and another wrote poems in English and French; a cousin of his translated Shakespeare.

His father died in 1870 leaving the family in difficult financial position. Cavafy’s mother moved the family to England, where the two eldest sons took over their father’s business. However, their inexperience caused the ruin of the family fortunes and they returned to Alexandria. But the few years that Cavafy spent in England shaped his poetic sensibility and he became so comfortable with the second language that he wrote his first poems in English.

After the brief time he spent in England he moved with his mother to Constantinople where he lived with his grandfather; his stay here was brief and he arrived in Alexandria in 1879. Although they lived in great poverty and discomfort, he wrote his first poems during this period. After working for short periods for the Alexandrian Newspaper and the Egyptian Stock Exchange, at the age of twenty-nine Cavafy took up an appointment as a special clerk in the Irrigation Service of the Ministry of public works, a position he held for the next thirty years. Much of his young ambition during those years was devoted to writing poems and prose essays.

Constantine Cavafy had a very small circle of people around him. He lived with his mother until her death in 1899, and after that with his unmarried brothers. For much of his adult life he lived alone. Influential relationships included his twenty-year acquaintance with E.M. Forster.

Cavafy had one long lasting friendship with Alexander Singopoulos, whom Cavafy designated as his heir and literary executor when he was sixty years old, ten years before his death.

Cavafy remained virtually unknown in Greece until late in his career. He was introduced to the mainland Greek literary circles through a favorable review written by the well known Greek writer Xenopoulos in 1903; however, he got little recognition since his writing style was different from the mainstream Greek poetry of the time. Some twenty years later, after the war of 1919-1923 between Greece and Turkey, a new generation of poets such as Karyotakis would find some inspiration in Cavafy’s work.

It is generally accepted that Cavafy was a homosexual and themes of gay relationships appear in a number of his poems; indeed there is hardly any reference to a woman or a kore, as in Elytis’ works where the kore is a predominant sensual image. In Cavafy, we find numerous sensual references to young men or ephebes, all in their early twenties.

Since his death his reputation has grown and now he is considered one of the finest Greek poets; his work has been published again and again and is taught in schools in Greece, and in colleges and universities throughout the world. A film about his life was produced in Greece in 1996.

He is considered one of the most influential poets of modern Greece and along with Palamas, Kalvos, Seferis, Elytis, Egonopoulos and Ritsos he was instrumental in the revival and recognition of Greek poetry both in Greece and abroad.

In 1926, the military government of Pangalos, after a submission by G. Haritakis, awarded him the “Silver Medal of Phoenix”. The same year the periodical Alexandrian Art was launched under his guidance.

After his death a collection of 154 poems was published under the care of his executor Alexander Singopoulos and his then wife Rica, and with the collaboration of the painter Takis Kalmouchos. Since 1948 “Ikaros” has been the publisher of Cavafy’s works in Greece.

The first official presentation of Cavafy in Greece was in the Hellinika Grammata by Gregory Xenopoulos in 1903. At the same time the English writer E. M. Forster was the first one to introduce the poet to international readers.

He died of cancer of the larynx on April 29, 1933, on his seventieth birthday, in Alexandria.