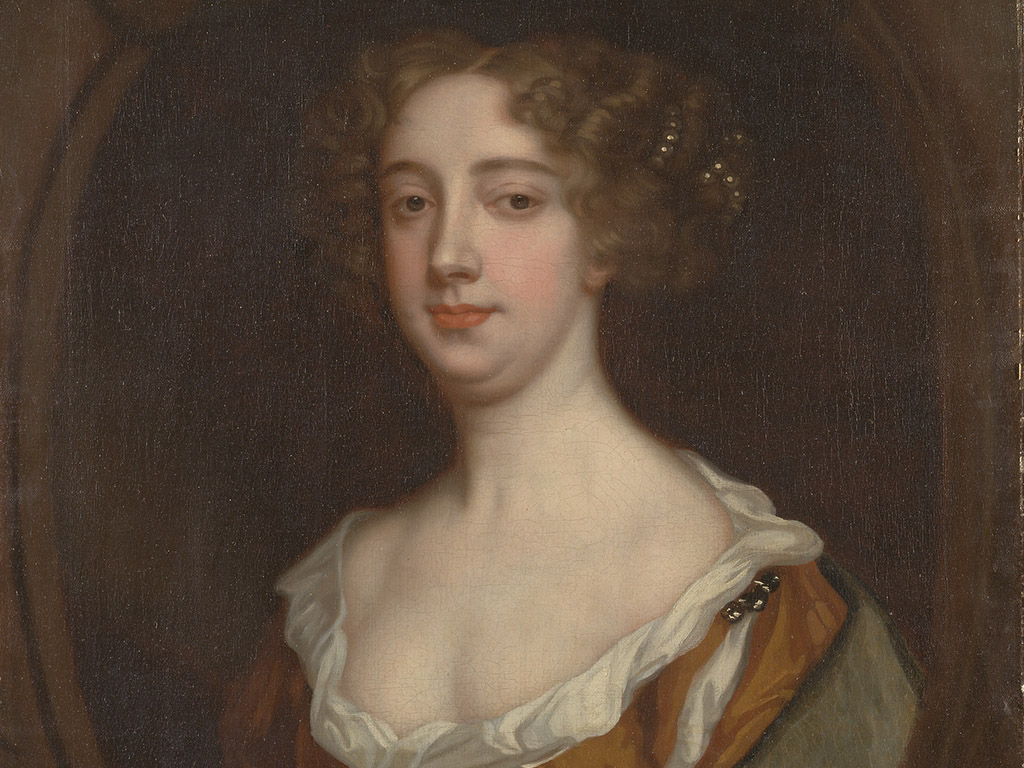 Aphra Behn (c. 1640-1689) was perhaps the most versatile, and was certainly one of the most important writers of the late seventeenth century in English. She wrote and translated poetry, translated works of science, published long works of fiction, and authored many plays. It was as a playwright, in fact, that Behn was probably most successful in her own lifetime. Between 1670 and 1689, a couple dozen of her plays were staged in London; some of them continue to be revived even now, most notably The Rover, which was first staged in 1677.

We know very little of Aphra Behn’s life before she started her writing career in London in the early 1670s. She never wrote a memoir (which is not surprising; people did not do that kind of thing in her era), and did not talk about her early life in letters that have survived. If she kept any kind of journal or diary, it has long since been lost. The lack of public information about her life before the age of about thirty make it very likely, though, that she did not come from a wealthy or prominent family. Scholars, working largely with parish records and surviving government documents, have pieced together some things. But often these are simply informed guesses rather than facts that we can know for certain. The best biography is Janet Todd’s Aphra Behn: A Secret Life and what I note below relies on Todd’s work.

When and where was she born? who were her parents? We cannot be sure. The best research we have indicated that was probably the person who is recorded in a baptismal record as “Eaffrey” Johnson, born in December 1640 to a Bartholomew and Elizabeth Johnson from Bishopsbourne, a town in Kent near Canterbury. The Johnsons were probably not a wealthy family, but they were not desperately poor, either; Bartholomew worked as a barber and at one time was in charge of supervising the poor in a parish in Canterbury.

How did she get the name Behn? and how did she pronounce it? Again, we are not sure, though the name seems to have come from a marriage she had in the 1650s or 1660s. She may have married a man called Johann Behn, who shows up in some business and shipping records of this period. No one has found a record of their marriage. The marriage does not seem to have lasted all that long; maybe he died, since she seems to be referred to as a widow in a single letter. We are not sure as to how she pronounced her last name: like “ben”? like “bean”? like “bane”? opinions vary.

Did she really go to Surinam in the 1660s? Maybe, though the evidence for that is the narrator’s claim in Oroonoko, which is, after all, a work of fiction. The first-person narrator’s claim that she went to Surinam might be true (Janet Todd believes Behn, and a lot of the circumstantial detail in Oroonoko would be hard to invent if a person had not been there), but there is much in Oroonoko that is obvious fabrication, so she might be making her trip there up as well and be relating information that she got at second hand. In addition to inventing the story of the African prince, Behn also seems to have invented the idea that her father was going to be the lieutenant governor of Surinam, as the narrator of that story claims; there is no chance that her father was ever in a position to get such a significant job, and he may very well have been dead by the time of her (purported) sojourn in Surinam. There is is no independent evidence, like a government report or a ship’s manifest, that places her in Surinam, so we cannot be certain one way or another.

I read somewhere that Aphra Behn worked as a spy; is that true? Yes, this we know. In the 1660s, Aphra Behn was sent to Antwerp as a spy on behalf of the English government; her mission (which involved trying to turn an English man there against the Dutch, perhaps by seducing him) seems to have failed. She used the code name “Astrea” (a name associated in Greek mythology with the goddess of justice), a name that she continued to use as a poetic name throughout her career. Behn may have done some other intelligence work for the government at other times in her 20s. We do not know why she stopped her mission, but she complained about not being paid, and at least one other person disparaged her work. She may have not been cut out to be a spy.