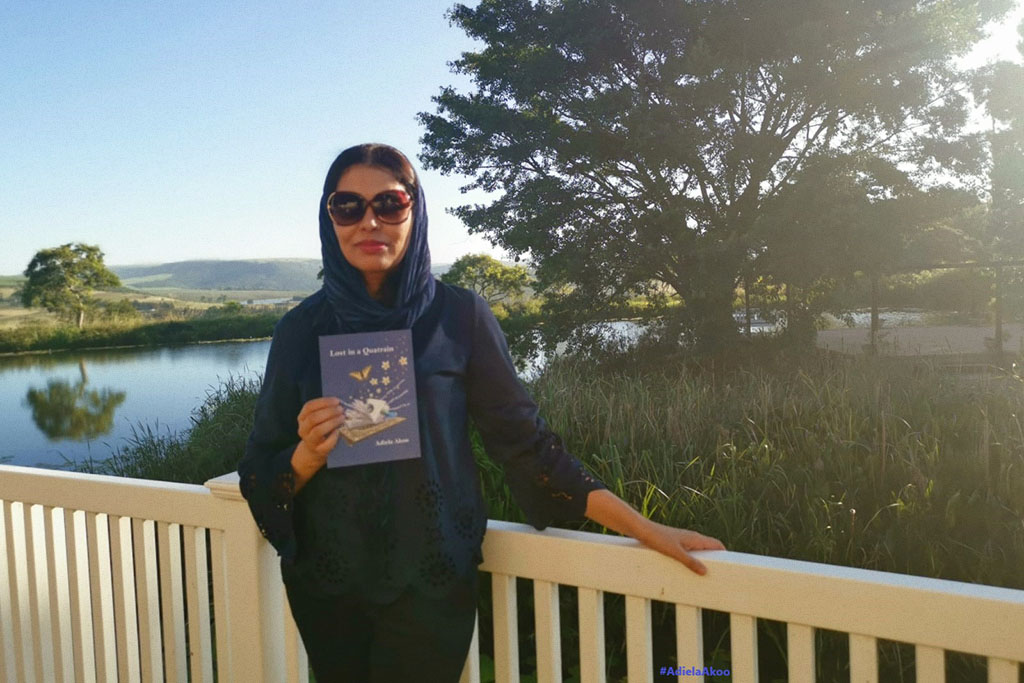 Adiela Akoo was born on the 4th of May in Pietermaritzburg, South Africa, to her creative artisan parents, a hairdresser mother and a cobbler father.

Poets are cut from a tender cloth that covers our world in beauty.Adiela Akoo

Her love for reading and writing stems from her mother, who encouraged her at an early age. Besides weekly trips to the local book exchange, her mother cut pictures from old magazines and stuck them in an exercise book, as prompts, and had her write about them daily. Her parents divorced when she was still very young and this was her mother's way, as a single mum, of keeping her daughter occupied while she was away at work.

Adiela's lifelong dream was to be a doctor, to heal people, perhaps due to the many occasions and long periods that her mother spent in hospital, during which time she was placed in the care of her maternal grandparents and aunts. She worked very hard and excelled at school, topping not just her class but the entire standard, year after year, thus winning the prestigious Dux Award. She was also nominated as Head Girl and went on to be accepted at one of the top universities in the country, the University of Cape Town (UCT).

Adiela Akoo, a recipient of the prestigious Dux Award, is a South African poet, author, and all round creative, with a background in banking and comprehensive healing.

She has served in various positions including as Provincial Coordinator for an International holistic healing association. But her passion has always been towards her creative side. She attributes the inculcation of her love for the written word to her mother, who encouraged her at an early age.

Her poems and essays first appeared in print in the quarterly literary journal, The Moving Finger. She has since been published in a variety of magazines, journals and anthologies across the world, including Fidelities, Different Horizons, Sincerely Yours, Emotional Journey's', Renaissance, Sufi, Nature 2018-2019, Grey Thoughts, 25 Years of Freedom, Tales for Love, Best of Africa, Universul Culturii, Best Emerging Poets of 2019, The Penmen Review, Songs of Peace, Our Poetry Archive, I Wish I'd Said Vol 3, International Literary and Art Review (ILA Magazine), and others.

She won the Poetry in my Mind August 2019 Poem Contest with her poem "As You Perceive", which was subsequently translated into Bangla, Turkish, Russian and Odia by fellow poets. "Redolent" was a runner up in a contest by Rui M Publishing. "Pre Natal" was nominated Poem of the Day on the popular poetry site PoemHunter and "A Scent on a Breeze" was picked up for publishing by Nightingale & Sparrow. "VIRUS" won the Poetry in my Mind April 2020 Poem Contest and "Whiplash" was quoted in the House of Parliament.

She has participated in public readings of her work, live and on air. She was a guest of honour at the opening address of the MSA of the University of KwaZulu Natal, Pietermaritzburg campus, where she had the pleasure of interacting with promising young poets. She was a judge at the Zee TV Miss India South Africa International Pageant, a guest speaker at The Alan Paton Literary Festival, and the Madibaland World Literary Festival.

Adiela was nominated as one of the Top 7 'Most Promising Literary Influencers' in the Global Book Community Awards 2020. She has also received The Silver Star Award from the Global Literary Society for excellent contribution to world literature.

Lost in a Quatrain is her soul stirring debut collection with each poem telling a story that pieces together the puzzle of this crazy, not always romantic, experience we call life...